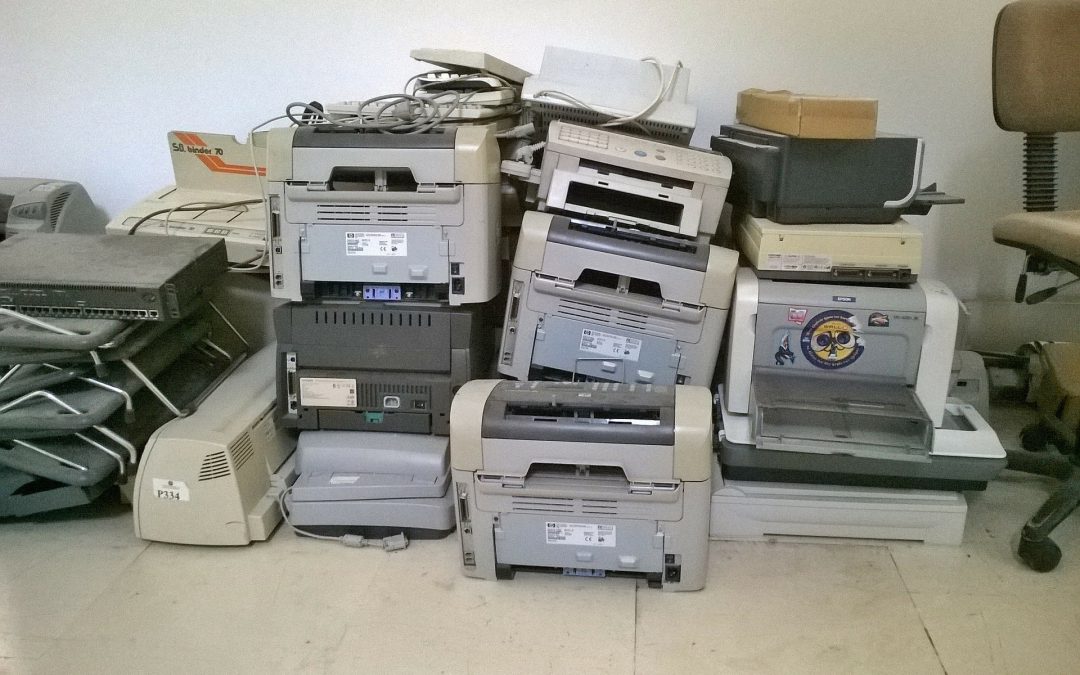 Printers have no mercy. They’re temperamental devices out to ruin everyone’s day, and they do a great job of it. On the Just Fix It help desk, we address issues with the accursed beige monoliths almost every day, and we’re still baffled by some of the issues they have. Between both software and hardware issues, the phrase “everything works until it doesn’t,” has never been more apt than when applied to a printer, which chooses to cease functioning of its own free will.

I don’t know if I’ve got my point across, but let me sum it up: printers suck.

Printing, as defined by the act of impressing text on paper, has been around for thousands of years, even before Gutenberg’s moveable type brought print to the masses of Europe in 1440. While the printing press helped bolster the renaissance period of Europe, the real renaissance for printers would come in the late 19th and early 20th century, with breakthroughs such as the mimeograph, dot matrix printing, and Xerography, better known as Xerox copying.

As for when printers started interfacing with computers; that gets a bit murkier. It’s known that the UNIVAC had a high-speed printer, with some citing that it was released as early as 1953. However, looking further into this reveals that the high-speed printer seemed to be for punch cards, while a second printer was available that merely worked like a typewriter; physically stamping ink onto the page. Indeed, this was likely the case, as the IBM 1403 line printer released in 1959 also used small hammers to print characters. Still, at least computers were talking to printers.

Following the widespread introduction of microcomputers in 1977, the first printer for home use, the Epson TX-80/TP-80, was released for the Commodore PET. The tractor-feed, dot-matrix printers are practically ubiquitous pieces of early computer hardware. The noisy machines were capable of only printing text until certain software enhancements enabled the printing of rudimentary images.

Dot-matrix printers, as reliable as they tend to be, were edged out of the consumer market by inkjet and laser printers starting in the 80’s early 90’s as the technology became more affordable. The HP ThinkJet was released in 1984 for the consumer market and introduced such concepts as the disposable print-head. Inkjet printers came with the advantage of color and image production, while sacrificing features like reliability.

THE RAZOR AND THE BLADES

If I had to say something nice about a printer, it would be that, like many parts of a computer, they’re made up of some pretty amazing tech. It’s easy to take for granted, but recognize that your printer somehow knows a way to put impossibly small text on a sheet of paper. Laser and inkjet processes have continued to dominate the consumer market for the past few decades. A laser printer uses toner powder and is commonly seen in places that print high volumes of black and white documents, while inkjet uses ink, and is best used when printing pictures.

What you may not realize, however, is that the money you plop down for whichever printer you choose doesn’t cover the cost to produce it. Printer companies commonly sell their inkjet printers at a loss, expecting to make up the difference with comparatively overpriced ink sales. It’s called the Razor and Blades business practice, with the idea that by essentially giving away the base unit, profit can be gained simply by selling refills or accessories. The practice can be found everywhere; from its namesake razors (ever wonder why blades cost so much?) to video game consoles.

Companies are then left to defend themselves from third parties trying to make cheaper alternatives to their pricey ink reloads. Many manufacturers put chips in their ink cartridges that ensure their printers only work with their cartridges. This practice also encourages companies to produce their products as cost-effectively as possible (ie. cheaply) to minimize the loss. That often means quality has to suffer, and with something that has as many moving parts as a printer, that tends to lead to issues. The inner workings are often made of nothing but plastic, resulting in gears being easily worn out or stripped over time.

Older printers tend to be more modular. Should the fuser or rollers wear out on something like an HP Laserjet 4, the process for swapping them out was relatively simple. On many modern printers – especially consumer grade ones – manufacturers try to push consumers to replace rather than repair. Components that were once easy to swap are no longer serviceable and years of anti-competitive practices have created a build up of strictly proprietary components that vary from model to model.

Even the ones that are serviceable have been accused of forcing service before the product has even warn out. HP found itself staring down the barrel of a lawsuit when it was discovered that its ink cartridges would report being empty after a period of usage, regardless of the ink it still contained. Samsung has been accused of putting a similar expiry on their imaging drums, and while no lawsuit has come of this to my knowledge, the evidence is pretty convincing.

NEVER THE TWAIN SHALL MEET

So if all printers are trash, what can you do? Well, there are a few methods you can take to try and cope with their obvious deficiencies. The most obvious is simply accept that you’re buying something designed to be quickly made obsolete and replace it as soon as it starts to misbehave. Printers tend to be fairly comparable in value to the ink that is used to fill them, so using up the included ink and throwing it away is a valid strategy, if you have no moral opposition to creating so much consumer waste. Don’t take that as a recommendation, though, the ink cartridges included with printers are often only half full, so it’s unlikely this would be economical.

It would otherwise be better to buy a laser printer rather than an inkjet, if you’re not set on printing out images and photos. While both the unit and the toner tends to be more expensive, laser printers themselves are often more reliable and toner generally has a lower cost per page. This can even be attributed to the fact that laserjet printers don’t follow the razor and blades practice that inkjets tend to lean towards, though they still suffer from a need to be priced competitively against the inkjets, which again leads to a decline in build quality. Toner also has the advantage of never drying out, something that ink loves to do if it’s left for too long. That at least can save you money in the long run, even if it can’t protect you from software issues related to drivers.

Or you could avoid printers altogether. If you’re a home user, consider taking your print jobs to copy center to have them handle it. It may be more inconvenient, but at least you’ll never have to deal with a printer telling you it won’t print a black-and-white document because it’s out of cyan ink. If you’re a business owner, it may be time to go paperless. In an age where almost everyone spends the bulk of their day in front of a screen and has a magic supercomputer in their pocket, actually printing out documents is becoming less and less necessary. Those of us on the help desk may be forever cursed to do battle with these beige monstrosities, but there’s still time for you to save yourself!